Ren Netherland began his career in photography over twenty five years ago while serving in the United States Navy.  After his Navy years he established his own portrait studio.  His love of animals compelled him to specialize in pet portraiture, even when it was not yet in vogue.  From a meager beginning his reputation grew, especially when his work began to appear in hundreds on well-known national pet industry publications, calendars and greeting cards.  He owned a pet portrait studio in Largo, Florida for over 14 years.  His studio was rivaled by no other, with its exquisite mini- “Hollywood” sets.

Due to an increase in nationwide demand for his unique ability, the studio was closed in Feb. 2003 to allow for more time and energy to be dedicated to the Mobile Digital Studio & Lab where he captures the special moments in time between people and their pets and the relationships that they have with each other.  His travels across the United States takes him from Florida, South Dakota, Wisconsin, Illinois, Ohio, Texas, Arkansas, Tennessee, Georgia, Pennsylvania, New Jersey, New York, Connecticut, Rhode Island, Massachusetts, Virginia, South Carolina, Alabama, Texas and Oklahoma.

In addition, Ren is the official photographer for many grooming competitions, shows, and trade expositions in the United States, and is Internationally known as the Best.  He has an uncanny knack for getting an animal’s attention and co-operation.  After seeing him work, you will not only agree that he has the gift of patience but that he truly loves his work.  Most photographers give up long before he ever would.  This is a fact that can be seen in his work.  He puts pets and people at ease from the very beginning of a shoot.  A photo session may be as short as five minutes or as long as three hours.

Eights months a year Ren visits many of the finer grooming shops, Veterinarians and pet boutiques across America in his mobile digital studio.  He offers some digital processing, on site, with the latest state of the art equipment, to produce the highest quality prints and products.

While traveling across America, he teaches the art and science of animal photography to a very select group of students.  Ren has also authored a book, "Pet Portraiture Made Easy".  Ren has written articles on pet photography for a number of nationally published magazines and his photos have been published all over the world.  His prestigious client list includes “Groomer to Groomer”, “Off Lead”, “Groom & Board”, “Pet Age”, “Dog’s Outfitter”, “Pet Business”, “Caged Bird Hobbyist”, “Dog & Kennel”, “Veterinary Connection”, “Dog World”, “Master Animal Care”, “The Home Pet Shop”, “Veterinary Technician”, “Pets Etc”, “The Pet Dealer”, “Pet Business”, “Pet Team Press”, “Natural Pet”, “Dog Fancy”, and “Cat Fancy”.  He is now publishing his very own line of greeting cards.  He has appeared on “Animal Planet” and "Groomer Has It".  His photography has appeared on "The Today Show", "Rachael Ray",  "Late Night with Jimmy Fallon", Animal Planets "Cats 101 & Dogs 101" and People Magazine, just to name a few...

In 2005 and in 2009 he was filmed for a documentary about himself and his travels across the United States while photographing pets.
There are a number of organizations that have or are featuring galleries of Ren’s work on their websites.  For years Ren has also had many well-known commercial client accounts for companies that produce pet related products and services. 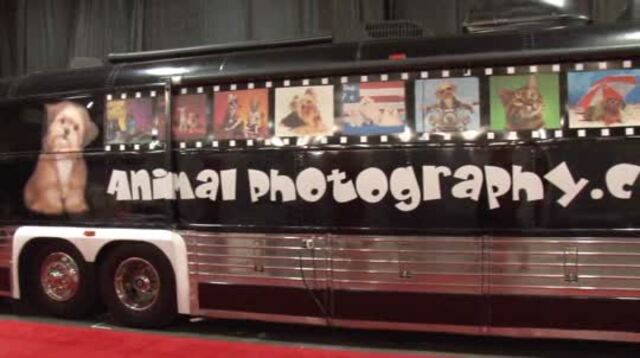 See All Videos by Ren Netherland