A Unique SOS for Grooming Help 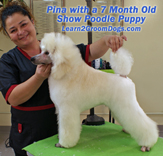 This is an amazing TRUE story that took place a few weeks ago with one of my companies. It’s uncanny how all the pieces of this puzzle fell together. In the end, it was tremendously rewarding to see someone apply a lesson so well.

I currently oversee five different companies in the pet industry. I don’t have a lot of extra time to spend in the social media world. However, I’m lucky to have a team of people around me that are able to spend a bit of time there. They give me a heads-up when they feel there is something worthy of my attention. On this particular day, there was a very loud SOS cry for help from Facebook.

Lea Ann is a newer groomer from Kentucky. She just had a client purchase a 7 month-old, cream, Miniature Poodle show puppy — and she wanted her to groom it! Her first show was in three weeks. Yikes! Although her basics grooming skills were strong, this presented a challenge outside of her comfort zone. She turned to her friends on Facebook for help.

One of those friends is Lisa Van Sweden my illustrator for Notes from the Grooming Table and Theory of Five. Whenever Lisa sees a tough question — or a plea for help — she privately contacts me to see if I can help. Lea Ann had no idea Lisa was connected to me, the Paragon School of Pet Grooming or Learn2GroomDogs.com — all she knew, “was Lisa was well-connected.”

Now this is where it gets weird.

A few weeks earlier we had been in Florida filming for Learn2GroomDogs. One of the Training Partners we filmed was Irina (Pina) Pinkusevitch. Pina did a grooming demonstration on a 7 month-old, cream, Miniature Poodle show puppy! Uncanny.

Not two hours prior to receiving this SOS, I had reviewed the rough edit of this video. We were getting ready to put it up as a ‘Sneak Peek’ in the next few weeks on Learn2GroomDogs, giving people a small taste of what they could look forward to in the Full Length video. The Full Length video would not be available for another four weeks.

I knew this lesson was almost custom-made for Lea Ann! However, if we stayed on track with our release schedule — she would miss her window of opportunity to make the first dog show with her client’s puppy. To complicate a few things, we were missing about four or five minutes of footage in the rough edit. (That’s why I review every video one or two times before it goes up on L2GD!) The footage that was missing was really critical; how to band off the top knot and create “the bubble.”

The next thing that was standing in our way was that Marc and I were headed off for a ski vacation with fellow top stylists, Teri DiMarino and Kathy Rose. Still, I knew I had to get this footage to Lea Ann ASAP.  As we’re driving to the airport, waiting for flights and touching down in Salt Lake City Utah, I was in touch with my office, our editor, and Lisa who was the link to Lea Ann. We needed to find the missing footage, finish out the edit a few weeks early and quietly posted on the L2GD website. The only people that were going to be able to find it in the tangle of over 200 videos, were people that had the inside scoop — namely Lea Ann.

Luckily, she found the video. It looks like it was exactly what she needed. The before/after photos arrived while we were skiing. I was so proud of her work. Teri and Kathy were impressed too. It was amazing to see how easily somebody could grasp the information on their computer screen by watching a streaming video lesson on-line and apply it to a real live dog. She nailed it. Sure, there’s some tweaking that can be done. Even the best stylists in the country are never 100% happy with their work.

Once we got back from skiing, I contacted Lea Ann privately via Facebook. That’s when I learned the next unique piece of the puzzle. She writes this;

“I’ve been a groomer for almost four years now. I was an actually student of Courtney Ramstack. I feel so lucky to have studied with her initially. She was tough, but I felt like I walked away from her grooming academy with the best foundation possible. It was a four week course featuring 40+ hours of classroom and hands on instruction. I LOVE watching her videos as well. It feels like I’m coming home.”

Now I’m totally blown away. She’s “One of Courtney’s girls!” I should have known when I saw the work. Courtney is one of my all-time favorite people. We go back a long way. We all met when PetsMart used the Paragon School for corporate training in the late ‘90s and early 2000s. In fact, two of my trainers and Courtney all competed at the same time around the country in grooming shows. They became great friends and earned the nickname “The Blonde Squad”. Over the years we’ve all maintained our contact and our friendship. She’s even been up to my home and ridden our Friesian horses. Having Courtney as one of our Training Partners for L2GD has been a treat. Not only is she an amazing person with a huge heart, she’s a fabulous teacher!! Lea Ann was fortunate to have trained under her initially — she got good solid basics and it shows!!

Lea Ann is even taken it one step further and contacted Pina where she got a very warm welcome. She also has been able to reconnect with her initial trainer, Courtney. Were excited to see where Lea Ann is going to take this grooming. Hopefully she’s made some contacts that will open the doors of opportunity even much wider for future as a talented pet stylist.

It’s such a small world. It’s amazing that a simple request for help on Facebook can yield the type of results that Lea Ann experienced. Whether you believe in Six Degrees of Separation or The Secret, this entire story has a unique feel to it — a warm fuzzy feeling that reminds all of us why we are in the service business. I love the pet industry and I love being able to help both people and pets through education. 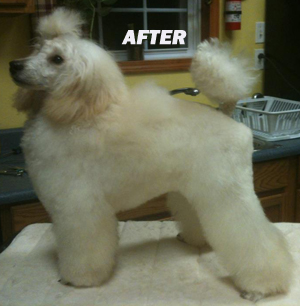